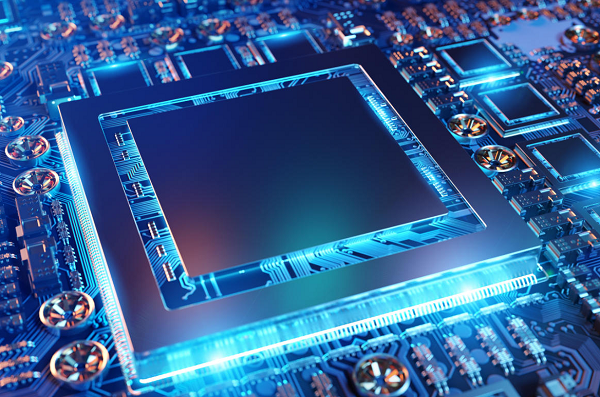 Our OEM and silicon hardware certification partners spend many hours testing independently, and jointly with Red Hat, to see to it that customers are successful with hardware deployments on Red Hat’s bare metal, virtual, and cloud platforms.

With thousands of components across hundreds of systems it can be time consuming to test every combination. This is where a well-prepared leverage strategy will help create a faster time-to-completion of Red Hat Enterprise Linux (RHEL) hardware certifications while helping to maintain the high quality and competency of supportability, security, and life cycle management our joint customers expect.

This practice is established by recognizing and requiring that the device is the same in each system, that successful certification test results for the given component have already been provided and accredited, and that the partner has already conducted its own independent testing of the Red Hat platform with the given component in each system where leverage is requested.

Leverage is not a free-for-all but based on existing testing already being conducted so now we need to optimize for conducting the right RHEL hardware certification testing. An effective leverage strategy can help limit testing and testing time spent during RHEL hardware certification is meaningful and valuable testing by minimizing redundant inconsequential testing.

Here are a couple of different strategies to consider. 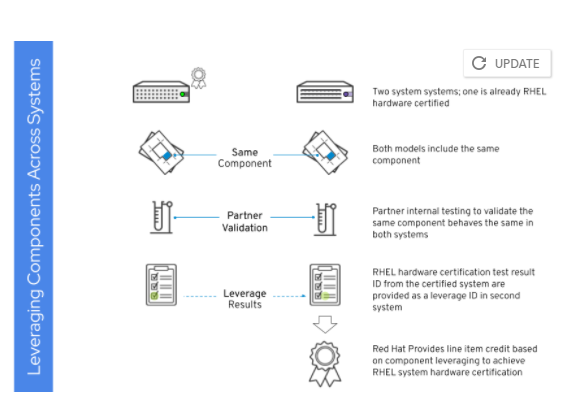 The first method is to create a reference matrix document for each RHEL major version where every component that is tested is recorded, including in which system certification, with which minor version and  what the test ID is as they are conducted and credited.

Then, when the same component is encountered later in another system the document can be referenced to help determine if the component has already been tested in RHEL hardware certification and what the required IDs are to request credit via leveraging.

For example, two systems may have a completely different implementation of a component with different features and capabilities because of physical requirements (like slot height, power, cooling) or market requirements (datacenter, industrial, edge) where the component is actually bespoke between the two systems and leverage would not be allowed.

Once validated, instead of standing up a test environment to retest the same card the test results ID from the reference matrix can be provided in the certification test plan for this component in the new system certification request.

This method has the lowest stand up cost and is good if you are inheriting a body of already certified systems without any knowledge of where components have already been tested.  You can start this process at any point and build up from there.

One negative to this test method is that it's reactive. This means hardware and test scheduling can be difficult, and requires strong continuity of test methods and information. An organization that uses third party testing may have trouble with this continuity, meaning that the leverage strategy can't work. 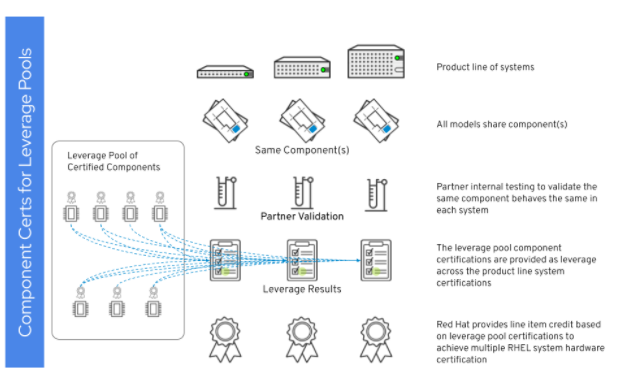 Leverage pools are also very effective during next-generation launches, of either Red Hat platforms or hardware platforms, as they allow work to be both serialized and parallelized. For example, a new generation of servers that all use the same series of network cards could utilize leverage pool certification for the network cards, conducting the testing back-to-back during the same day.

These two strategies are not mutually exclusive and can be mixed, along with strategies that may help achieve a more efficient rate of effective certification testing for you, your company, Red Hat and our joint customers. 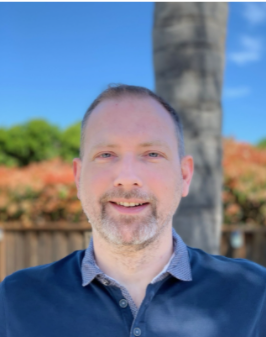 Rob Landry
Senior Principal Product Manager - Technical
Rob Landry is a Technical Senior Principal Product Manager in Partner Certification at Red Hat. He joined Red Hat in 1999 and has led the hardware certification program for most of that time. During the last two decades he has been working with partners and developers as a and is now part of the team leading the evolution of Red Hat Cloud, Hardware, and Software certification. He is passionate about open source and Red Hat software serving as the foundation for customers' next generation IT systems.